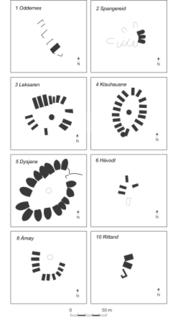 The court site (tunanlegg, ringformet tun) – i.e. a number of houses placed side by side in a circle (or circle segment), each of the buildings featuring an entrance in the short wall facing the open courtyard in the centre – is a well-known type of site in Norwegian Iron Age archaeology. More than 20 court sites dating from the Early Roman period and later are found along the Norwegian coast from Agder in the Southeast to in the North. In the following text, I put forward some arguments for interpreting these monuments as being integral to military organisation in Roman period Norway, and suggest a connection with the so-called ‘Illerup horizon’ in the Danish bog offerings.

Today, after a long scientific controversy, the Danish bog offering sites with weapons are being regarded as the results of a relatively little number of major depositions of materials belonging to attacking but defeated armies, and the finds rescued can be associated with different military ranks. The key material from Illerup place A (c. 200 AD) can be used for discussing many interesting questions.

According to analyses of the sacrificed objects, the weapon types have a distribution pattern common to most of , and can not be used to narrow down the place of origin of the attacking army, while the personal belongings are apt. The raw materials used for the combs – mainly elk antlers – help to establish an image of an army that came from the Scandinavian peninsula. The argument that Norwegian troops were involved in the attacks against Jutland around 200 AD is strengthened by some other facts:

1. There are close similarities between artefacts in Norwegian graves, for example in Tryti (Western) and Bø (), and finds from Illerup.

2. An axe shaft found in Illerup was made of Christ’s thorn, i.e. a wood species that in is known only from areas with a northern Atlantic climate, especially the coast of .

3. The SW Norwegian provenance of some of the attackers is perhaps indicated by a runic inscription known from Opedal in the Hardangerfjord, showing similarities to the ones from Illerup.

The preliminary conclusions from the still ongoing evaluation of the find material from place A in Illerup point towards an army originating in the attacking in 30-40 ships of the Nydam type shortly after the year 200. According to Jørgen Ilkjær’s and Claus von Carnap-Bornheim’s interpretation, a stratified, highly sophisticated, military organisation must have been in existence in an area covering what is today Norway already in the Early Roman period. The military ranks from Illerup are found in the contemporary weapon graves in . Based on the fact that for instance 410 spearheads were salvaged during the excavations while only 40 % of the Iron Age lake has been excavated, the defeated army originally consisted of a maximum of 1200 persons. By distinguishing between the different types of metal used for shield mounds (iron, bronze, silver/gold), three different military ranks can be identified. The men buried at Avaldsnes (Rogaland) in C1b/C2 and at Sætrang (Buskerud) in C3 belonged to the leading military stratum (see below), whereas burials from Steigen (Nordland), Tjølling (Vestfold) and Jevnaker (Oppland), are associated with the middle one.

The man buried in the Bø grave in Steigen is of particular importance. In Illerup he would have had only a middle ranking position, whereas he was part of the top social stratum in , probably without any local competitors in his local area. The position of this weapon grave only a few metres away from a court site is one of the best pieces of evidence at hand for the military component of these monuments.

The court site organisation of has recently been introduced into the discussion about how to interpret the finds from Illerup place A. According to Trond Løken’s point of view, the army or a part of the army invading gathered at the court sites in . This argument is based on two assumptions: firstly, that the Norwegian monuments served as temporary accomodation for retinues, and, secondly, that their distribution pattern, the absence of encircling ring-walls and the constructional similarities reflect a social and military organisation with a driving force behind it, i.e. a person or persons having the upper command. A calculation suggests that c. 250 men could have gathered in the four large court sites in Rogaland before engaging in the maneouvre against Jutland.

This hypothesis can be considerably elaborated upon. Egenæs Lund reflected upon the total number of Southwestern sites already in the 1960s, starting from the fact that these structures are always accompanied by other spectacular types of archaeological monuments, like big grave mounds, richly furnished graves, and large boathouses. Based on these criteria, he suggested that even more court sites were to be expected in Rogaland, namely at Avaldsnes, in the Sola region, and at Egersund. In fact, these places would have been ’predestined’ sites for monuments of this kind, and their absence may either be attributed to destruction at an early time, or to monuments not visible on the surface, like the one in Oddernes. Since several huge boathouses have recently been discovered in Avaldsnes, there might still be a chance for more discoveries.

The person buried at Avaldsnes in Karmøy and having the highest rank in the Illerup hierarchy is very interesting as a starting point for making further reflections. The extraordinary status of this burial from C1b/C2 excavated in the 1840s and earlier is reflected by the size of the mound, with a width of almost 50 m, the golden neckring of 600 g of gold, the shield with silver ornaments etc. Considering all the grave furnishings together, it is in fact the richest weapon grave of the Roman period in Scandinavia, ranking as high as for example the East German grave from Gommern, probably dating to the late 3 rd century, i.e. C2. A person like the one buried at Avaldsnes is very likely to have been in control of something more than an ordinary tribal chiefdom, and for that reason he may have been at the top of the SW Norwegian hierarchical organisation of court sites, acting as a (petty) king. If this is indeed the case, such an overlordship might have been only temporary, and most likely based on the person of the king, i.e. a Personenverbandstaat. This is not dissimilar to the political system suggested by Lotte Hedeager for in the Late Roman period. Many, if not all of the prerequisites for the establishment of an early state structure that Hedeager note for parts of in the Late Roman period, are found in , too.

Around 200 AD settlements are restructured, and an infield-outfield system is established. The new, unprecedentedly stabile settlements of the Late Roman period in can be interpreted as resulting from a new social structure and new relations of production, demanding that the farms were no longer moved on a more or less regular basis. The cultural landscape was ‘locked’ in a system with steady infields and outlands. Fenced cattle roads leading from the farm byres to the outland pastures, as well as the regular occurrence of enclosures for tending animals, indicate a degree of specialized animal husbandry. The use of stone for building houses and fences might indicate a new and innovative meaning of property relations and inheritance. Several technical innovations are discernible in the archaeological material from the Roman period: The shaft furnace of Continental type and the occurrence of pit houses used for handicraft production are but two of those innovations. Thus far, all the known finds of iron production sites where shaft furnaces of Continental type have been employed in the Late Roman period are from the regions of Agder and Rogaland. Several of these sites seems to be linked to central settlements – Håvodl was mentioned earlier, but there is also an iron production site in the close vicinity of Oddernes. Pit houses are not very common in the Early Iron Age in , unlike in the Late Iron Age. It might be significant that two of only a little number of known sites are found in the same milieus as court sites, i.e. Oddernes and Spangereid. As for other technological innovations in in the Roman period, one could mention the yet unprecedented, specialized pottery producing settlement discovered by Perry Rolfsen at Augland near Oddernes.

The discussion about the interpretation of the find material from Illerup place A is still ongoing, and some archaeologists have doubted Ilkjær’s point of view, for example by pointing to the fact that the bog offerings may reflect inner-Danish confrontations, perhaps with engagement of Norwegian troops, or, alternatively, that the offerings represent the booty from a Danish raid in Norway, and thus constitute a Germanic version of a Roman triumph, an interpretatio Romana. Most of these alternative interpretations do not seem to have any bearing on Ilkjær’s work with the military hierarchy, as it can be reconstructed from the Illerup find. For this particular discussion, it isn’t really relevant if the kind of army that can be reconstructed in Illerup was defeated in or in , as long as it can be shown to have existed in contemporary . On the other hand, it can be argued that the Norwegian find material showing similitaries with the Illerup objects is rather limited and stems from burials in as much as from This, though in a somewhat different context, was pointed out by Wencke Slomann already, in her discussion of the Bø find from Steigen. However, the court site organisation in is a highly interesting source material to be integrated into the discussion about the Danish bog offering sites because it definitely existed before 200 AD. Whether society and military logistics in were really developed enough for such manoeuvres is a question worth raising and discussing.

This points are elaborated upon in a recent article by Oliver Grimm and I in Norwegian Archaeological Review.