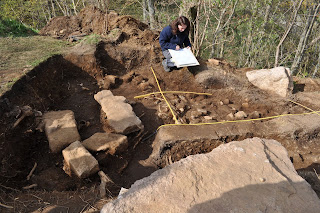 An early runestone was discovered at the Hogganvik farm in Mandal last autumn. When phase one of the archaeological excavations at the find spot is now over, the results are amazing. When excavation work continues in June, archaeologists expect to uncover the burial of Kelba-thewaR, the name of the deceased person commemorated in the runic inscription.

This is the first time ever that archaeologists have been able to find an early runestone in its original context, and associated with a burial.

The Hogganvik stone was laying face down when discovered last September. However, the preliminary excavations have documented that the stone was raised originally, and later overturned. Both the preservation of the runes and the position of the stone indicates that this happened relatively shortly after the runestone was put in place. 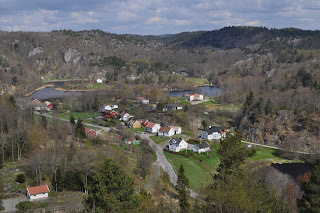 The runestone seems to be part of a rather complex monument. It is located on a rocky outcrop on a hill slope. The outcrop has been levelled using soil and stones to make an even platform. Here the runestone was put, with four supporting stones on the sides, and overlooking the valley below. This monument marks the entrance to a cemetery on the hill top. We believe that there is a burial, probably a cremation burial, awaiting discovery just below the stone platform in front of where the runestone originally stood.

Another burial was excavated on the hill top, some 40 meters away from the runestone monument, in 1990. Here, a cremation from the Early Roman Iron Age was unearthed. There was another burial mound closer to the runestone, but this was sadly destroyed without excavations being carried out.

The runic inscription is one of the longest known in the elder futhark. It consists of c. 60 characters. The inscription transliterates, according to runologist James Knirk:

The inscription and the monument is early, but we do not know how early. Judging from the inscription alone, it could be from anytime between c. 200 and c. 500 AD. My guess, from an archaeological point of view, would be in the early years within this time span. Hopefully, the burial associated with the stone will provide more certainty. 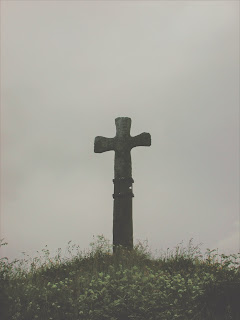