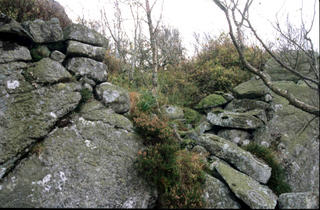 Salen is a farm in Lista, Vest-Agder, SW Norway. Here lies the hill fort (Norw. ‘bygdeborg’) Slottet or Salslottet, which was among the very first Norwegian hill forts to be investigated archaeologically. Slottet was partially excavated by H. Gjessing in 1921 (1), and tentatively dated to the 5th century AD (2).

Salslottet is mentioned in written sources dating from the late 16th century and on, and according to local tradition the ancient kings of Vest-Agder once resided there (3). As most hill forts in Norway, Salslottet is a natural steep rock formation, reaching an altitude of 216 metres above sea level. Access to the elevated top of the rock is difficult, as there are but two rather narrow entrances (4). At irregular intervals at both the paths leading toward the top of the rock, are the remains of dry stone walls. Similar walls are found along the edges of the top plateau. The top plateau is oval shaped and measures c. 90 x 60 m.

The elevated area is dominated by the exposed rock surface, thus prohibiting any significant vegetation from developing. Salslottet has a commandeering position in the rocky landscape in Northern Lista, and the view from the top is excellent. It would be possible to monitor access to the important portage at Listeid, located between the Eidsfjord and the inner water system of Framvaren, from here.

Gjessing’s rather small scale excavation on Salslottet was a side effect of his more substantial work on the nearby Iron Age farm site of Knutstad (1). In his unpublished report, he refers to his work on Salslottet as nothing more than a trial excavation.

At the NW edge of the plateau is a natural depression in the rock surface, measuring c. 2 x 1,50 m, and c. 1,65 m deep. The excavator suggests that this depression had served as a water reservoir. Such features are rather common with the hill forts in Norway.

This natural well was where Gjessing started his work. While draining the water reservoir, a number of artefacts were discovered in the mud at the bottom. Besides some wooden sticks with sharpened points that Gjessing guessed were of rather recent origin, one other stick, possibly a staff belonging to a spindle, as well as one pot sherd of coarse fabric were found.

A trench was then opened on the inside of the stone wall protecting the NW entrance to the plateau. The excavated area was located on a narrow shelf immediately below a steep, 4 m high mountain wall, oriented WSV-ENE. This lower plateau measures c. 17 x 45 m. Unlike the top plateau, this area was covered with a substantial turf-like soil layer. Although no real cultural layer was found in the trench, several artefact finds were made. Pot sherds belonging to 4-5 vessels were found, one of the vessels being a bucket-shaped pot. The latter find furnishes the main basis for the dating of the hill fort to the Migration period. Further finds included a spindle whorl, a glass bead, a stone axe, some flint debris, and a number of pebbles, as well as some pieces of iron slag. Apart from two hearths, no real structures were observed in the trench. The artefacts were found scattered in the soil layer. Small pieces of charcoal and other remains signifying the presence of fire were also observed (1).

While the Norwegian hill forts are considered by many scholars to be military constructions with at least a major phase of use in the Late Roman period/Migration period (5, 6, 7, 8), others have suggested that other functions might be as likely, at least in some cases (9, 10, 11). As for Salslottet, the artefact finds would not be out of place in an ordinary settlement context. A similar pattern was observed in the only other hill fort excavation in Lista, conducted by J. S. Munch in 1957 (12). The lack of a cultural layer, however, does not indicate permanent habitation on Salslottet. A total of 13 hill forts are now known in the rather limited settlement district of Lista. Several of them seem to be aligned with old roads and/or seaways, and a military function, i.e. one that has to do with observation and control, should be considered likely (13, 14).

I visited Salen in 1952 when my grandfather's brother was living there with his family. His name was Hans Christian Larsen. I have some photographs of the people and the area.